The United Nations (UN) has just announced that global food prices surge to highest levels in almost a decade. Food prices have been rising for 12 months in a row including May, which is the longest stretch in a decade. Bloomberg comments that “Higher food costs can accelerate broader inflation, complicating central banks efforts to provide more stimulus.”

Meanwhile the latest China producer price index surged to 4.4% reflecting the rise in commodity prices and higher energy prices. While the energy part can be explained with a statistic base effect, the strong impact of higher industrial input factors can’t. For instance, we expect that copper will continue to rise as well as iron ore due to the global growth acceleration and the expected green revolution.

Despite the rise in PPI (see figure below, orange line), producers’ profit margins are declining. If we exclude food and energy products (volatile components) from the consumer price index (CPI, black line), then we will observe no signs of rising inflation.

Both described higher price effects will be present for next months, and we therefore expect, that just as Mrs. Yellen, the secretary of the US treasury has announced, inflation will be sticky and higher figures in 2022 must be expected. The jury if this is all transitory is still out. 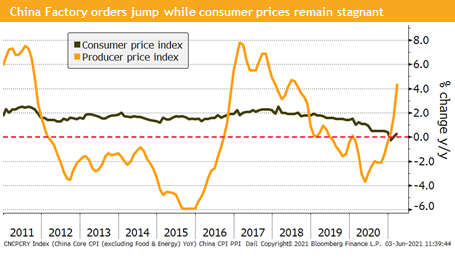 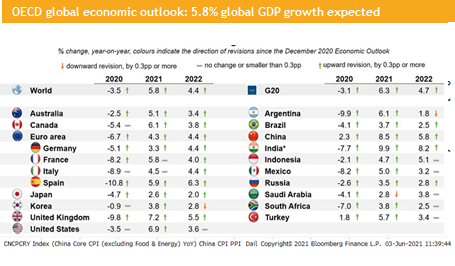 The OECD has just released its global growth outlook. As expected, they were forced to substantially revise their forecast to the upside. The world might now grow 5.8% in 2021 and 4.4% next year. Both estimates are substantially higher than the average growth we have seen over the last decade.

This forecast is supported by the latest global PMI data, which were released after this OECD economic update. However, the leading indicators are now at levels where we must expect them to fall in the coming months, which is somehow in line with the OECD forecast for the next year.

Higher inflation, so far higher than anticipated growth and artificially low-kept central bank policy rates are the perfect definition of a financial repression, a topic we regularly pick up. We continue to expect that the Fed will try to solve the US debt to GDP “problem” by inflating and growing it  away.

The US budget proposal of Mr. Biden to spend USD 6 trln next year would rise the debt to GDP ratio to an estimated high level of 117%, a level where measurements to reduce it must be considered, unless financial repression does the trick. 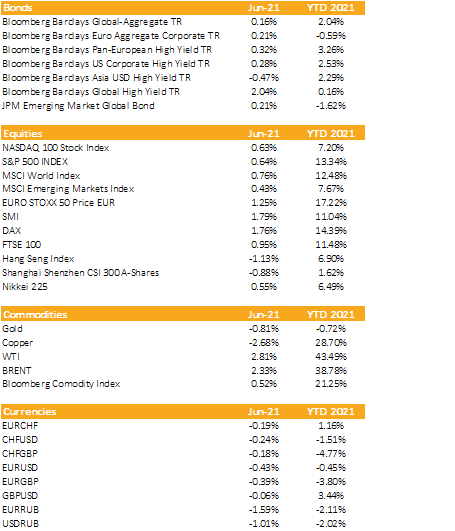 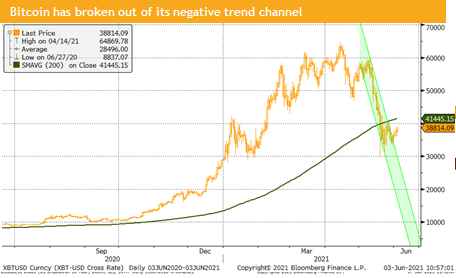 After reaching its all-time high Bitcoin has corrected to USD 48’000 and then has rebounded like the community has expected. After that Mr. Elon Mask’s tweets have caused a selloff to around USD 30’000. As of this writing bitcoin has just broken out of its negative trend channel and tries to overcome its resistance level around its 200-day average. Similar pictures in Ethereum and Ripple – both have sharply sold off and might now rebound.

The rebound in Ethereum is more pronounced than in Bitcoin. Before the correction Ethereum was on its way to replace Bitcoin as the largest crypto asset and it seems this process continues with the stronger rebound.

The crypto community goes hand in hand with the meme stock folly. AMC, a loss-making US cinema chain, has risen 3’000% YTD. The stock price is driven by the Reddit’s r/wallstreetbets community, which were also among others responsible for the short squeeze in GameStop earlier this year.

The sky seems to be the limit. Or as the community says, “to the moon”. However, we would argue that Newton’s law of gravitation should be applied in the long run. But short-term it is quite likely that Bitcoin, Ethereum and others will rise strongly from their current levels, driven by its community.

CHF has gained value against the USD after the US job report was released, which was better than one month ago but still weaker than expected. This gives the Fed more time to wait to start any tapering.

The USD measured by the DXY index stayed in a narrow trading range (89.6-90.5) and trades now at the same level as 3 weeks ago.

The sector rotation is ongoing. The Russel 2000 kept outpacing the Nasdaq 100 over the last 4 weeks. But once on Friday the job data released US treasury yields fell, and the Nasdaq and global tech outpaced cyclicals and value stocks. Overall, both areas have performed well.

Forward looking we believe that global semiconductor producers will outperform the broad market. The shortage of microchips pushes prices up and supply is built up.

The latest PMI data for emerging markets is still weaker than in developed countries. If these countries get access to vaccine later in 2021 and in 2022, we expect a similar reopening effect like we see it right now in Europe. A weaker USD is on top supporting the economic rebound.

US 10-year government bond yields were range bound and kept below 1.6% after the US job data. Breakeven rate have come off its recent recached highs although published PPI and CPI data or commodity prices like WTI or lumber keep rising. We believe that TIPS are overvalued, and the price correction was overdue.

Meanwhile US high yields continue to trade higher. Spreads have slightly compressed further, and yields kept going down. The market is priced for perfection, but due the expected strong economic recovery we do not expect any significant spread widening over the coming months. 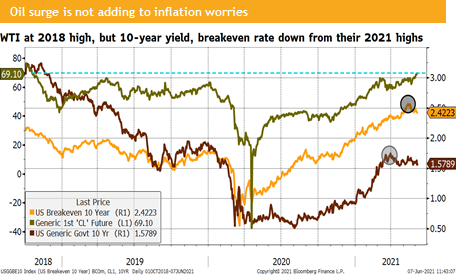 Gold: The gold price has overpassed the 1’900 level and is now in a consolidation phase. Mrs. Yellen was reckoning about higher US yields which added pressure on the price at the G7 meeting.

Iron Ore: After the release of China’s import statistic and its latest industrial production report Iron ore rose almost 20% in less than two weeks. Like in many other industrial input products the surge in demand for iron ore is overpassing the global supply capacity.

WTI and Brent futures are both trading around USD 70. The recent rise was driven by stronger economic data and the OPEC+ announcement to limit global supply.