Worldwide general expectations suggest monetary tightening across the globe as we already see it in Russia and Brazil where central banks have recently increased their policy rates.

However, China’s central bank has just announced a cut in the reserve requirement ratio (RRR) for nearly all Chinese banks by 50 basis points, effective 15 July. This is its first broad-based easing since January 2020. This step came just days after Premier Li Keqiang called for the use of an RRR cut and other monetary policy tools to support the economy and small and medium-sized enterprises. This cut will release about CNY 1 tr into the financial system and shows that Beijing is adopting a more pro-growth stance amid an uneven recovery.

Also we noticed that the ECB is going to further stimulate the economy in the Europe. Over the weekend, ECB President Christine Lagarde said that the next Governing Council session will have “some interesting variations and changes” and willd be “an important meeting.” This happens after the news of last week when ECB has shifted to a symmetrical inflation target of 2%, from a prior commitment to keeping inflation “below, but close to, 2%.” Overall, this should make the ECB policy structurally more dovish (accommodative). 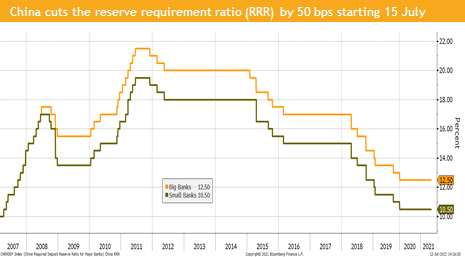 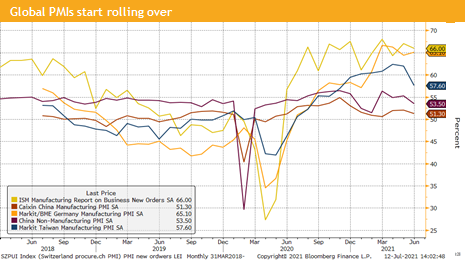 Fed speeches over the last week have prepared investors that first hiking steps are not imminent. For instance, on 9 July, Mary Daly, the president of the San Francisco Fed, stressed that there are several  risks to the economic recovery. “I think one of the biggest risks to global growth going forward is that we prematurely declare victory on COVID.”

All these more dovish moves can be explained in the light of recent negative news flow from the COVID front and some weaker than expected macro data.

Nevertheless, PMI data show that a slowdown stays at a very high level for the US, while in Europe the data is on average on a 15-year high. In Spain we have the highest results for 19 years. Only in China we do see PMI data approaching the 50 barrier which divides growth from slowdown.

Peak growth and peak earnings are the dominant arguments for more stimulus. But they are good arguments for a goldilocks scenario as well, i.e., solid growth with some inflation. This might not only support the economy but also financial markets in general. 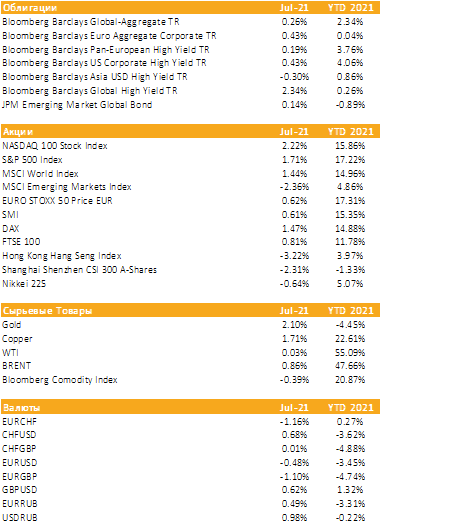 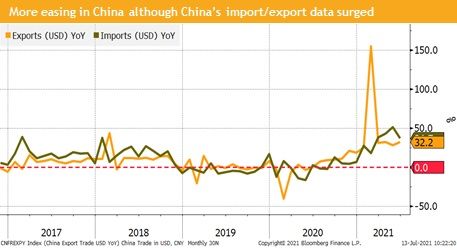 The cut of the Chinese reserve requirement ratio (RRR) due to growth concerns was the first easing step since January 2020. Therefore, today’s Chinese import export data were a big surprise: Exports have surged to 32.2% YoY beating expectations of a slowdown to +23% YoY. Similar picture is seen with the import data which surged to 36.7% (expected 29.5%).

In Europe the latest Markit PMI data indicates the strongest growth for 15 years according to the Markit press release.

However, both areas have just cut rates or announced that they will be more dovish during the coming months.

Also, the Fed indicates that rising rates is not on their priority list. Even the “starting about talking about staring tapering” was postponed to post-summer period.

What this all means is that all three central banks are deliberately letting the economy running hot. Letting inflation surge and indirectly pushing real rates further into the negative, aka financial repression.

The implications are that default rates will stay low, spreads for corporates will stay tight for longer and equity markets are well supported, while pullbacks might continue to be minor or like last week just used to buy the dip.

CHF has played out its role as a save haven currency. During the mini pullback in the equity markets, we did see a stronger CHF and JPY while the USD has weakened.

The EUR gained against the USD during the pullback but since the beginning of the week the USD has regained some of its losses.

Similarly, the USD measured by the DXY lost during the pullback but has regained half of the occurred loss since then.

If seasonality continues to play out, we expect that both Nasdaq indices will continue to outperform the Russel 2000 and the S&P 500 over the summer into autumn mainly driven by large cap tech. The FANG+ index has started to outperformed the broad market after a consolidation since last August. Apple for instance has reached several new record closing levels.

We are at the beginning of the Q2 earnings season. For both the US and Europe we do expect unprecedented YoY growth rates, partially driven by the lockdown one year ago and by the strong pent-up demand of consumers.

After the last Fed meeting, we have seen a drop in 10-year treasury yields to below 1.5%. That was followed by a further drop do around 1.25%. Then and now market commentators do expect rising yields, but we are stocked below 1.4%. The latest auction of 10-year treasuries has seen a strong demand for this bond at a yield of 1.36%. This is amazing, but institutional investors are not only forced to buy bonds but also seem happy with a nominal yield below 1.4%.

Therefore, real treasury yields are far below zero in the light of 5.4% US CPI. Even more amazingly, US high yields have risen during the recent one day drop in equity markets. Spreads are very tight, but if the economy keeps growing and if monetary stimulus persists this will last longer. 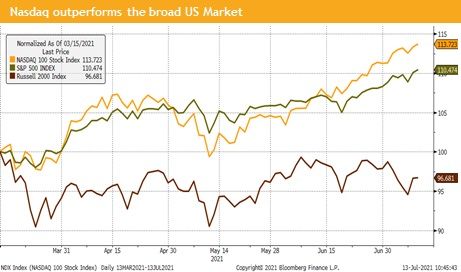 Gold: Gold has regained the 1’800 level during the selloff. It continues to trade below the resistance area at around 1’835 – 1’840. Mid-term we should see higher prices, it may well be during the next equity pullback.
Copper: Since the June 21st copper is rising in a very volatile market. It lost during the equity pullback more than 5% but has gained more than half back after. The global demand is rising while in China the demand is temporarily covered by the strategic reserve. Mid-term China will return to the global market, which gives additional support to the price.
WTI and Brent futures have gained value due to the dispute at the OPEC+ conference. The participants could not agree on future production quotas, which was interpreted as a continuation of insufficient supply for the expected reopening demand.

This Market Watch (hereafter «MW») is provided for information purposes only. This document was produced by Blackfort Capital AG (hereafter «BF») with the greatest care and to the best of its knowledge and belief. Although information and data contained in this document originate from sources that are deemed to be reliable, no guarantee is offered regarding the accuracy or completeness. Therefore, BF does not accept any liability for losses that might occur using this information. MW does not purport to contain all the information that may be required to evaluate all the fac­tors that would be relevant for entering into any transaction and anyone hereof should conduct their own investigation and analysis. In addition, the MW includes certain projections and forward-looking statements. Such projections and forward-looking statements are subject to significant business, economic and competitive uncertainties and contingencies, many of which are beyond the control. Accordingly, there can be no assurance that such projections and forward-looking statements will be actualized. The real results may vary from the anticipated results and such variations may be material. No representations or warranties are made as to the accuracy, or reasonableness of such assumptions, or the projections, or forward-looking statements based thereon. This document is expressly not intended for persons who, due to their nationality or place of residence, are not permitted to access such information under local law. It may not be reproduced either in part or in full without the written permission of BF.