Macro Update: Core inflation in the US and Eurozone will trigger sharp rate hikes

The latest rise of headline CPI data to above 10% in the UK and to 9.9% in the Eurozone were in line with expectations. But like in the US, we do see in Europe a surge of core CPI where food and energy are excluded. While in the US we expect already for a while that the next rate hiking step will be another 75 bps, we see finally comments from ECB officials that they consider at their next meeting on October 27 to raise rates as well by 75 bps. This will hit hard an already weak European economy.

In the UK, we have seen an expected U-turn in fiscal policy. The UK prime minister Mrs. Truss has stepped down after only 44 days in power. The interim finance minister has reverted all announced tax cuts and reestablished the tax hikes for corporations announced by the previous government. The Bank of England has officially stopped its unlimited bond buying program. It is expected that they will raise rates by at least 50 bps at their next policy meeting at the beginning of November. However, it is open if they can start with their QT program to shrink the BoE balance sheet.

But what all of this means is that the public debt-to-GDP ratio will rise. However, with a level of around 90% the UK stands still at a much better place than most Eurozone countries. 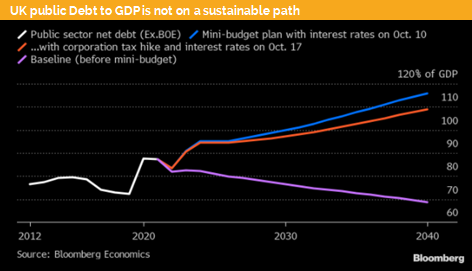 For instance, in France the public debt-to-GDP ratio is at 114%, but total debt to GDP is far above 370% followed by Italy which is roughly at 240%. Such debt burdens limit the room for the ECB to raise rates. However, due to the surge in inflation, the ECB might be forced to raise rates by 75 bps which is already reflected by a higher EURO and by a higher 10-year Italian government bond yield which has reached the highest level since 2012.

The ECB will therefore be forced to buy Italian government bonds to keep yields at depressed levels, while at the same time they will raise policy rates and take out liquidity of  the market. This shows the dilemma that, on the one hand, they continue with a lose monetary policy by buying bonds but, on the other hand, they tighten the monetary policy by raising rates due to a surge of the core CPI.

To make matters worse, such forward looking indicators like the IFO business climate, the European PMI indices and the German ZEW index do all paint a picture of an economic slowdown while the PMI price-paid sub-index forecast contributed to an elevated inflation.

So far the European and US job markets, which are lagging indicators, do both still show no sings of a slowdown. But we believe that will change over the coming 6 months. 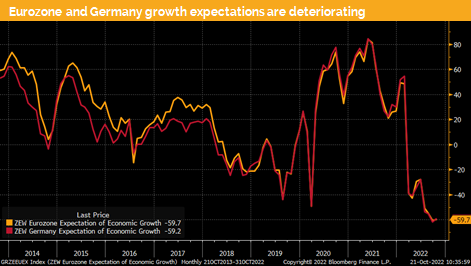 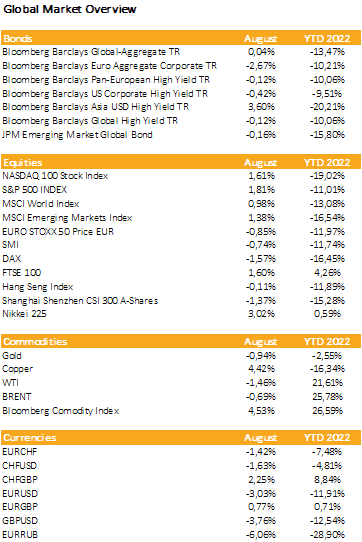 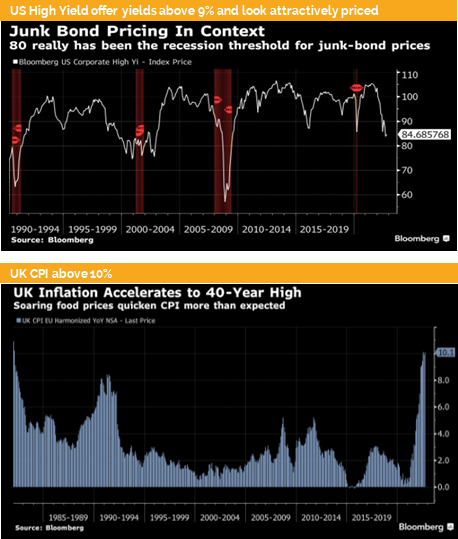 The CHF has depreciated against both EUR and USD. The euro got stronger due to the new expectation that the ECB will hike now 75 bps and not 25 or 50 bps like it was some weeks ago expected.

The EUR has recovered against the dollar at the beginning of October but since then it has resumed its downward trend.

The USD measured by the DXY has since our last publication fallen from 114 to  110 only to rebound back above 113. We still expect that the US dollar will slightly appreciate over the coming weeks due to its relatively better economic outlook compared to the rest of the world.

The S&P 500 has fallen below 3500 but shortly after rebounded to around 3700. As of this writing we are retesting the lower end of the trading range.

From a valuation point the US market is still overvalued and therefore index levels of 3000-3400 would be reasonable. It must be seen if we go to such levels this year or only in H1 next year. We might have a relief rally in the meantime.

Overall, we stay in a secular bear market, and we expect that earnings forecasts globally will come down and therefore the upside for equities will be limited.

US treasury yields keep rising at a faster pace since the latest US core CPI rose unexpectedly to 6.6%. We continue to believe that inflation will stay at elevated levels of 4-6% over the coming years. Even though the fed keeps repeating that they want to bring inflation down to below 3%. Short-term we see a further inversion of the US yield curve as markets expect that the fed’s terminal rate will be closer to 5% than to the previously expected at 4.5%.

US high yield do offer now around 8-10% yield while the default ratio is still in the low single digits. Spreads might widen but with a  starting yield of more than 8% you might still end up over 12-months with a nominally positive return. YTD, US high-yield bonds lost 13% while investment grade bonds lost 22%, we expect that the outperformance of US high-yield bonds will continue. 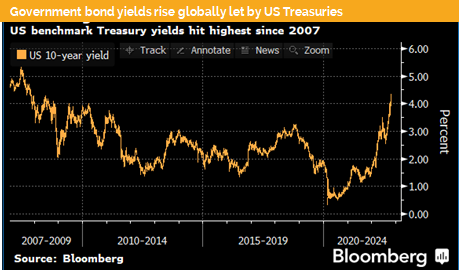 The gold price has as expected mean reverted to the low, we have seen during September. Higher yields and a strong US dollar are both holding back the gold price.

Copper has been trading in a narrow trading range and we expect no major rise over the coming months. Only when the fed indicates that they might start with rate cuts, we could see copper as a lead indicator to rise. But we still see higher prices mid-term due to an expected increase in demand driven by the green revolution.

Both oil futures prices have seen a price spike after OPEC+ has announced a supply cut. However, since the 7th October around 40% of the price increase has mean reverted due to the lackluster global economic outlook. Over the winter we expect that oil will at best stay range bound, but due to seasonal demand we could see higher prices by the end of the year.

This document has been issued by Blackfort Capital or its affiliates and / or associates (hereinafter “Blackfort”) for informational purposes only and should not be construed under any circumstances as an offer to sell or a solicitation for any offer to buy any securities or other financial instruments. This document is not an invitation to provide any services, advertising, or an offer to conclude any deals or agreements. All materials are intended for use in this document, are indicative and intended for your use only. This document does not address investment goals, financial situation, or individual needs. The provision of information in this document is not based on your circumstances. This is not investment advice and Blackfort does not make any recommendation regarding any products or transactions referred to in this document, nor is it a preliminary determination of the risks (directly or indirectly) associated with any product or transaction described herein.

Blackfort and / or related parties may take a position, participate in the market and / or transact in any of the investments or related activities mentioned here and provide financial services to issuers of any other person mentioned here. The information contained in this document is based on materials and sources that we refer to as reliable, however Blackfort makes no representations or explicit implied obligations regarding the accuracy, completeness or reliability of the information contained in this document. Any prices or levels indicated in this document are presented only as preliminary and indicative data, unless preliminary data or offers are indicated. Opinions expressed as of the date of publication in this material. Any opinions expressed are subject to change without notice and Blackfort is under no obligation to update the information contained herein. Neither Blackfort nor its agents, representatives, agents, or employees shall be liable in any way for any consequential loss or damage arising out of any use of this document.